In the 1830’s pioneers, adventurers and entrepreneurs began arriving at the new town named Michigan City platted at the end of the Michigan Road.  The new road starting at Madison, Indiana was fulfilling its purpose of encouraging settlers to move from southern Indiana into the scarcely populated northern part of the state.  The land at the mouth of Trail Creek was purchased in 1830 by real estate speculator Isaac C. Elston as the site of his city. In 1832 there was only one cabin but by 1833 there were enough settlers to hold an election for a Justice of the Peace and to name a postmaster. The stage coach was running through the town 3 times each week bringing new residents. In 1834 Charles Cleaver stayed in the local tavern and wrote that in Michigan City, “The buildings consisted of one small brick tavern, a frame one opposite, a blacksmith shop, and half dozen houses built in, on, above and below the sand. It then contained about fifty inhabitants.”  But, there was no church. With few people living in the area between Niles, Michigan, South Bend, Indiana and Michigan City there was a scarcity of ordained clergy of any denomination to serve those faithful to their Christian religion. Those few clergy who had moved to the area traveled frequently to serve the needs of the new settlers.

The Right Reverend Philander Chase, an Episcopal priest and bishop had settled his family on a farm near Niles, Michigan. Trinity Episcopal Church traces its origin to the October 1834 visit of  Rev. Chase, who recorded in his diary, “stopped in Michigan City, read the service, visited with a few people, drove through the sand dunes along the lake, and in the evening again read the service.” By this date there were about 700 residents. A few months later in 1835 Rev. Chase was called to become the Bishop of Illinois. On his way from Niles, Michigan he again stopped in Michigan City and recorded the event in his memoirs, “preached the first sermon ever delivered there from an Episcopal minister. This was in a large schoolhouse well filled with attentive auditors.” 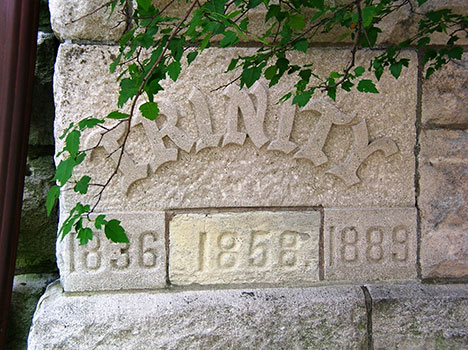 With a lack of clergy, from its inception the community of Episcopalians depended on the work of its faithful members. The first recorded communicants arriving in 1835 included Dr. H.T, Maxon and Schuler Pulford, who later served as wardens and vestrymen of the fledgling church. Arrangements were made with Rev. Joseph Selkrig missionary at Niles, Michigan to travel periodically to serve the spiritual needs of the new community. On December 11, 1835 it is recorded that he held services in the building used by the growing congregation as the first church in Michigan City. This was located at the corner of Fourth and Pine Street, and housed the congregation until 1858.

In 1836 Michigan City was incorporated as a city, and the pioneer Episcopalians organized themselves under the name of “Church of the Advent.” 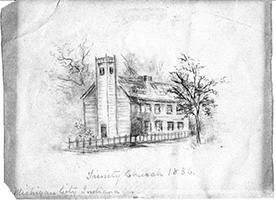 Records show that there were 12 communicants of the Episcopal Church. Due to a conflict with state law it was necessary for the congregation to meet again and the name was changed to “Trinity Protestant Episcopal Church.” Shortly thereafter in 1837 the newly named parish was visited by the Bishop of Indiana, the Right Rev. Jackson Kemper.  The Rev. D.V.M. Johnson was sent by the Domestic and Foreign Missionary Society of New York to become the first settled priest on February 1, 1838. In his first report to the society he writes, “the large room which the congregation has neatly fitted up is almost full of attentive listeners to the preached gospel.” Regular participation in the sacraments thus began with the first baptism in February 1838, the first marriage in April, and the first confirmation in January 1839. After two years it was felt that the aid of the mission society was no longer necessary and that Trinity could be self-supporting.

The history of Michigan City and that of Trinity Episcopal Church are inseparably intertwined.  The strength and prominence of the church was due to the faithful service of its wardens and vestry many of whom also served the city as civic leaders. Zebina Gould the first Senior Warden in 1837 also served as the city harbor Wheat Inspector for the growing shipping industry.  T.B.W. Stockton, Samuel Mower, Charles Palmer, and H. I. Rees all served as early mayors of the growing city.  Augustus Barber was an early postmaster and city Treasurer. Urial C. Follet also served for many years as the city Treasurer

Urial C. Follet was the early leader who had the most significant influence on the growth and development of Trinity Church. He served for 25 years as a vestrymen, 1849-1862, and 1864-1872. He served as Senior Warden for 24 years 1863 and 1872-1896. His generosity made the present endowment fund possible. In spite of the tragic loss of all three of his children his faith endured.  The memorial gift of the white marble baptismal font in honor of his children is used to this day. 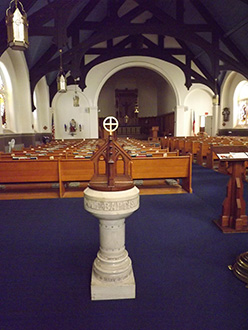 He led the parish through the Civil War, economic depressions and panics, as well as the industrial growth of Michigan City. During his years of leadership Trinity had 15 rectors and two churches were built.

By midcentury the pioneer church on Pine Street was no longer adequate to meet the needs of the congregation or the growing importance of the Episcopal church in the social and political life of the city.  The rector at this time was the Rev. C.A. Bruce, who during his long career ultimately built six new churches from Michigan to Arkansas. Under the patriarchal leadership of Zebina Gould and Urial Follet the vestry resolved to seek subscriptions for a new church. The congregation acquired the property at the corner of Sixth and Franklin Street, essentially the geographic center of the town. The new wood frame church was built in the prevailing architectural style of the time, “Carpenter Gothic”. It was a demonstrative statement of the church’s prominence in the community.

The fortunes of Trinity Church rose with the growth and development of Michigan City as both a port of commerce and an industrial manufacturing site. The largest and most significant industry was the manufacture of railroad cars by the Barker and Haskell Company. Three generations of the Barker family left their imprint on Trinity as major patrons. The marriage of John Barker Sr. and his wife Cordelia in 1841was one of the first recorded at Trinity. Both his son John H. Barker and his granddaughter Catherine Barker Hickox donated buildings and many improvements to the property at 6th and Franklin Streets.

Success as an industrialist did not insulate John H. Barker from personal tragedy.  His three children by his first wife all died in infancy. The construction of the first Barker Hall was his memorial to his children. The building served the congregation as both community center and school with classrooms and auditorium.

During the 30 years between 1858 and 1888 the Trinity Church congregation experienced a six fold growth. Under the continuing leadership of Urial C. Follet as Senior Warden and the influence of industrialist John H. Barker and banker W.W. Vail as vestrymen, the old wooden church was deemed to be no longer adequate in size or style for the congregation. 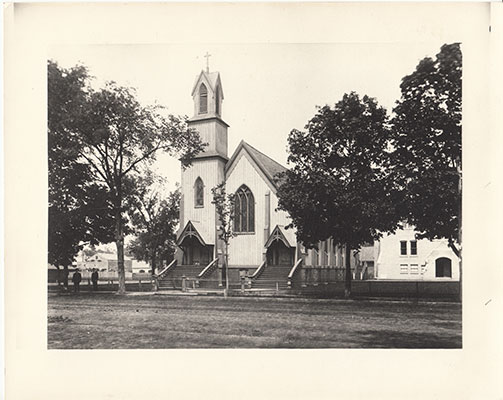 In 1889 the third Trinity church seating 450 was built of Indiana Limestone. Designed by Chicago architect Henry Starbuck in the Romanesque Revival architectural style, it matched the grandeur of any Chicago building of its day.

In 1898 the diocese of Indiana was divided with the northern portion of the state, becoming a separate diocese.  The vestry, under the continued leadership and the financial backing of John H. Barker, voted to offer Trinity as the cathedral church. 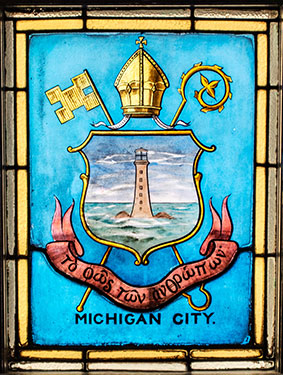 John Hazen White took residence in the rectory as both rector of Trinity parish and the first bishop of the new Diocese of Michigan City.  In 1901 John H. Barker, at his expense, replaced the old rectory with a grander eight bedroom mansion as a residence for the bishop. In 1910 Mrs. John Barker donated the gothic arched cloister that connects the church to the bishop’s residence. Both changes in liturgical style and lay leadership brought conflict to the Trinity parish. John H. Barker died in 1911 and by 1918 the Cathedral of St James had been established in South Bend with the diocese renamed to that of Northern Indiana.

It is a testament to the spiritual fortitude of the Trinity congregation that in its first 100 years the parish thrived without clergy leadership for 15 years and 9 months. Twenty-five rectors served Trinity with each staying an average of 1 year 9 months. Only five rectors served more than 5 years.

The 20th century brought stronger clergy leaders who served for much longer terms  resulting in congregational development.  There was also the addition of new buildings and renovations to the Trinity church complex. Lay leadership remained as a core strength of the congregation, with several parishioners serving multiple terms as Senior Warden. The beauty of the church and its worship services were enhanced through numerous furnishings, gifts and memorials given by parishioners. Ministries included choir and organ, Altar Guild, Acolytes, Youth Group, and Women of Trinity.

By the 1920’s the congregation had outgrown the spaces provided by the first Barker Hall. The Rev Earl Ray Hart coordinated the gift of a new Barker Hall, financed by the railroad car heiress Catherine Barker Hickox. Her gift included a substantial endowment for the maintenance of the hall. The new facility was constructed in 1929 as a memorial to her father and his deceased children. Dedicated, “for the use of the people,” the building became a social and cultural center for the entire community. Along with the “Great Hall”, meeting rooms, classrooms, and offices, was the addition of a chapel expanding the opportunities for worship.

During the rectorship of Rev. David Reid in 1956 significant alterations were made to the layout of the 67 year old church in the name of “modernization” and to fit changes in liturgical style.  Entrances were rearranged, the choir and organ were moved, and open arches were closed, changing the essential character of the sacred space. At that time, growth of Michigan City’s lakefront communities and a desire to offer alternative liturgical worship lead several Trinity’s lay leaders to found St. Andrews by the Lake Church.

The long rectorship of Rev. Robert Center, from 1964 – 1988, provided stability for the parish during the time when Michigan City was undergoing both economic and urban transformation. The departure of manufacturing industries, combined with the forces of urban renewal and changes in consumer shopping left the historic center of the city with mostly empty storefronts. Trinity Church and Barker Hall were no longer at the cultural, social and geographic center of the city, as new city development was to the south.  Nonetheless Trinity’s congregation supported extensive repairs and maintenance projects including a new slate roof for the church. An additional endowment fund was established to support the ongoing maintenance of the church and rectory. Throughout the ten year rectorship of Father Stephen Gerth Trinity maintained its identity as a locus of traditional Anglo Catholic worship.

In the 21st Century Trinity has been sustained by the faithful service of its lay leaders and the visiting ministry of the Rev. Canon Hugh Page Jr., Vice President of the University of Notre Dame. Recognizing its important role in servicing the community Trinity leaders established a Food Pantry program, continued its Thrift Shop ministry and hosting of community events in Barker Hall. 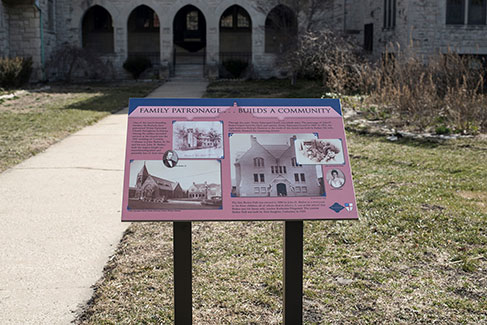 As Michigan City heads into the third decade of the century it is once again at the center of an urban development: Michigan City’s revitalizing Arts District.  The beauty of  Episcopal worship remains at the center of parish life. A youth music program provides spiritual growth and education for children. Service to neighbors continues to make Trinity integral to Michigan City community life. Under the guidance of dedicated wardens and vestry, and the ministry of Father Joseph Tamborini Czolgosz, Trinity remains a loving community dedicated to serving the spiritual, social and cultural needs of Michigan City in the name of Jesus Christ.